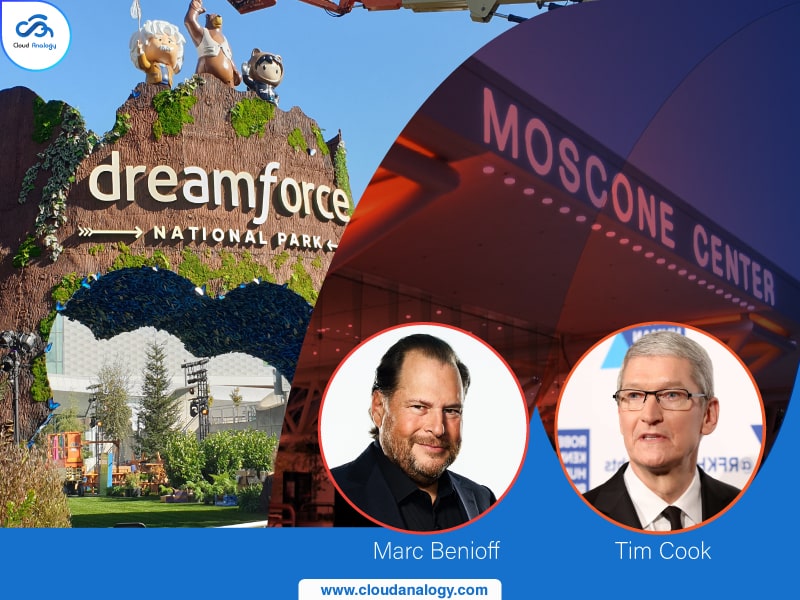 Tim Cook, Apple’s CEO, sat down with Salesforce CEO Marc Benioff at Salesforce’s Dreamforce conference 2019 in San Francisco, where the pair talked about enterprise mobility, environmental sustainability, and highlighted Steve Jobs unveiling products on the same stage. Cook shared his thoughts on privacy, environmental conservation, innovation and how Apple products, including the iPhone, iPad, and Mac, are being used in an enterprise environment.

The Salesforce conference was held at the Yerba Buena Center for the arts in downtown San Francisco, where Apple had announced some of its biggest product updates and many famous Apple products.

Cook said, “It was a theater where many Apple products were announced, and Steve introduced many, many products, and I could feel him and his presence whenever I come here.“

Environmental efforts and privacy were important issues during the 30-minute fireside chat. Cook praised Apple’s commitment to privacy and said that saying Apple saw this as a fundamental right and that the company wants to do even more than what it’s legally required today. Cook said Benioff that innovation is not good enough if the company does not hold to its core values.

“People told us that it is not possible to bring Apple to the market with 100% renewable energy,” he said while talking to Salesforce CEO Mark Benioff. Apple’s goal is to make recycling so effective that it wouldn’t need to mine any minerals from the earth to manufacture its products. Earlier this year, devices such as iPhones and batteries were made from recycled components, Tim cook added.

Apple that has made the most of its money from the iPhone over the past decade, has been trying to make its products more attractive by addressing issues such as promised privacy protections and environmental protection measures.

But that’s not all. Apple has also launched new services such as Apple TV Plus streaming TV programs and a game subscription service called Arcade. It also has expanded into new hardware, such as the popular AirPods headset, Apple Watch, and HomePod Speaker Smartphone.

These are mostly consumer products, nevertheless, Cook said his company’s products have become more popular with businesses too.

For example, Apple products are used by all Fortune 500 companies, and Benioff stated he only relies on iPhones to get his work done. “I don’t even have a computer anymore, I don’t need it,” he said.  “The phone has become an extension of my office wherever I am.”

Moreover, Cook Said: Apple continued to work for its environmental efforts to “leave the world better than we found it”. “Apple’s purpose is not to do things you’re legally required to do, “but rather,” beyond that.”

Further, he said that Apple remains committed to its environmental efforts as part of its goal to “leave the world better than we found it.” Apple’s goal isn’t to “do the things you’re legally required to do,” but rather to “go way beyond that,” Cook said.

Last year at Dreamforce 18, Apple and Salesforce announced that they had partnered to make Salesforce products better on Apple devices. The San Francisco-based company produces cloud-based software for salespeople and other workers to manage their customers effectively. During this year of Dreamforce, Apple and Salesforce declared that there are two new tools available to do things like adding Siri shortcuts in the Salesforce Mobile application.